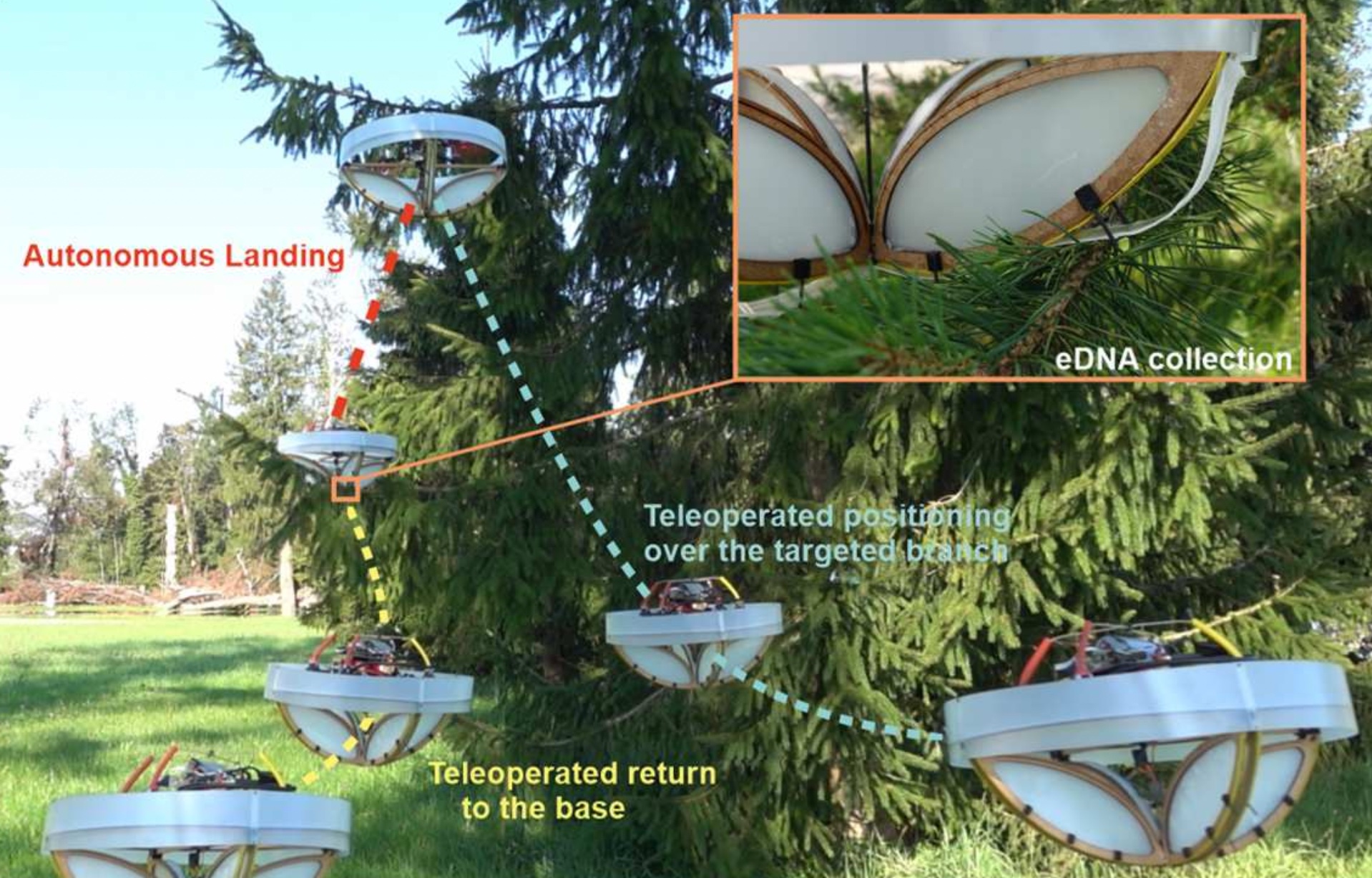 Understanding the biodiversity of forests is crucial to their conservation or restoration. Collecting “external DNA” left behind by animals is a good way to find out what lives there without having to spot them or even be there at the same time — and this drone from Swiss researchers makes taking samples from tree limbs safer and easier.

External DNA can come from lots of forms — dead skin or feathers, waste, fluids — and can be found in soil, water, or on surfaces like rocks and tree branches. Basically anywhere an animal might hang out, it leaves a trace of itself and we can detect that. Until recently this type of DNA amplification and analysis might have been too complex or expensive, but the tools to do it have become much cheaper and easier to use.

There remains the matter of collecting the DNA, though, and while biologists can certainly collect soil and water samples or scrape the sides of trees, high-up limbs where birds, small mammals, and insects live their whole lives are inaccessible without special equipment. Try telling your department head you need an extra $20K to get a tree-climbing team because their wasn’t enough guano on the forest floor.

The adventurous roboticists at ETH Zurich have come up with a clever method of sampling external DNA from tree branches that can easily be done from the ground. In a paper published in Science Robotics, they propose a drone-based solution: an aerial robot that can fly up to high branches and snag samples from them without damaging the branch or itself.

The drone looks a bit like a modernist light fixture, with a beautifully crafted wood frame and plastic shielding, and strips of adhesive tape or “humidified cotton” mounted on its lower surfaces. After being guided to a generally favorable position, it hovers above a branch to be sampled and monitors any movement like swaying or bouncing, synchronizing its approach. When it makes contact, it pushes with enough pressure to cause loose eDNA materials to transfer to the strips, but not so much that it pushes the branch out of the way. Essentially, it leans on the tree.

Diagram from the paper showing how the drone operates.

The initial outings with the drone in the arboretum surrounding the institute (we know a lot about forests right by universities, just as we know a lot about the psychology of undergraduates), the team was able to identify dozens of species of plants and animals (as well as microorganisms). That they collected much more before it rained than after suggests the method finds recent presence, which can be helpful or limiting depending on what a project needs.

The team plans to continue working on the drone, letting it go further into trees or higher up, or adjusting its collection technique to work in different circumstances.

“Our results pave the way for a generation of robotic biodiversity explorers able to survey eDNA at different spatial and temporal scales,” write the researchers. “By allowing these robots to dwell in the environment, this biomonitoring paradigm would provide information on global biodiversity and potentially automate our ability to measure, understand, and predict how the biosphere responds to human activity and environmental changes.”

You can see the drone in action below: