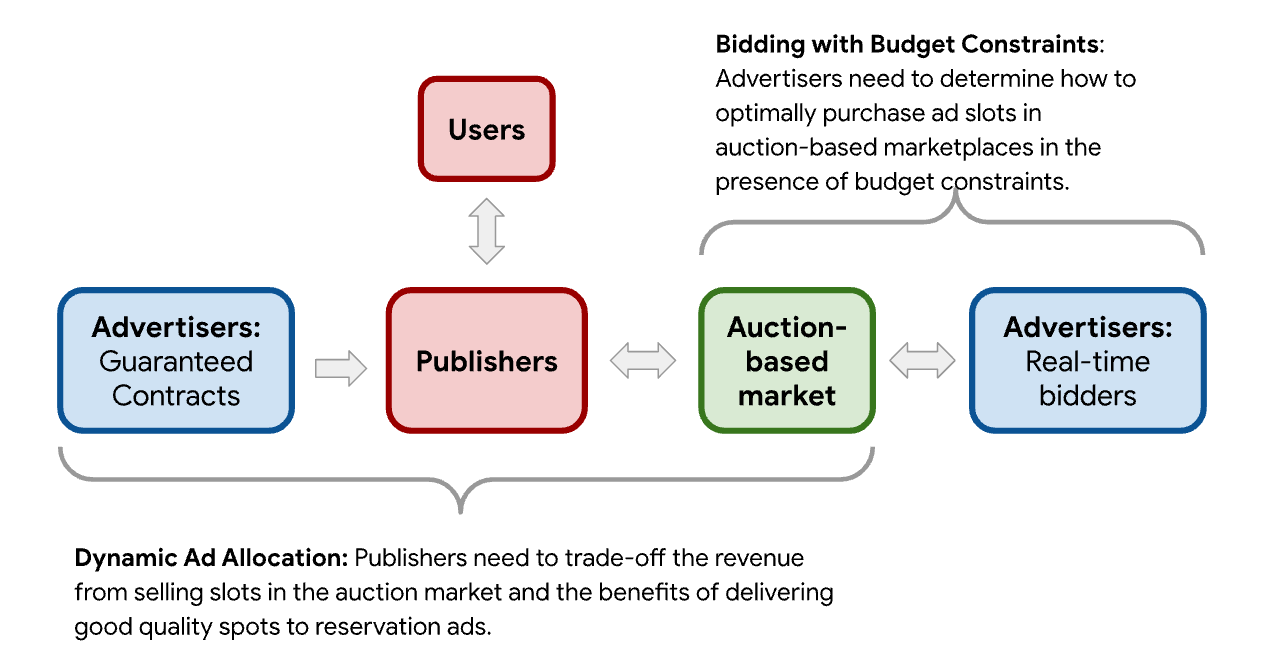 The emergence of digital technologies has transformed decision making across commercial sectors such as airlines, online retailing, and internet advertising. Today, real-time decisions need to be repeatedly made in highly uncertain and rapidly changing environments. Moreover, organizations usually have limited resources, which need to be efficiently allocated across decisions. Such problems are referred to as online allocation problems with resource constraints, and applications abound. Some examples include:

The common feature of these problems is the presence of resource constraints (budgets, contractual obligations, seats, or inventory, respectively in the examples above) and the need to make dynamic decisions in environments with uncertainty. Resource constraints are challenging because they link decisions across time — e.g., in the bidding problem, bidding too high early can leave advertisers with no budget, and thus missed opportunities later. Conversely, bidding too conservatively can result in a low number of conversions or clicks.

In this post, we discuss state-of-the-art algorithms that can help maximize goals in dynamic, resource-constrained environments. In particular, we have recently developed a new class of algorithms for online allocation problems, called dual mirror descent, that are simple, robust, and flexible. Our papers have appeared in Operations Research, ICML’20, and ICML’21, and we have ongoing work to continue progress in this space. Compared to existing approaches, dual mirror descent is faster as it does not require solving auxiliary optimization problems, is more flexible because it can handle many applications across different sectors with minimal modifications, and is more robust as it enjoys remarkable performance under different environments.

Online Allocation Problems
In an online allocation problem, a decision maker has a limited amount of total resources (B) and receives a certain number of requests over time (T). At any point in time (t), the decision maker receives a reward function (ft) and resource consumption function (bt), and takes an action (xt). The reward and resource consumption functions change over time and the objective is to maximize the total reward within the resource constraints. If all the requests were known in advance, then an optimal allocation could be obtained by solving an offline optimization problem for how to maximize the reward function over time within the resource constraints1.

Achieving the Best of Many Worlds with Dual Mirror Descent
A simple, yet powerful idea to handle resource constraints is introducing “prices” for the resources, which enables accounting for the opportunity cost of consuming resources when making decisions. For example, selling a seat on a plane today means it can’t be sold tomorrow. These prices are useful as an internal accounting system of the algorithm. They serve the purpose of coordinating decisions at different moments in time and allow decomposing a complex problem with resource constraints into simpler subproblems: one per time period with no resource constraints. For example, in a bidding problem, the prices capture an advertiser’s opportunity cost of consuming one unit of budget and allow the advertiser to handle each auction as an independent bidding problem.

This reframes the online allocation problem as a problem of pricing resources to enable optimal decision making. The key innovation of our algorithm is using machine learning to predict optimal prices in an online fashion: we choose prices dynamically using mirror descent, a popular optimization algorithm for training machine learning predictive models. Because prices for resources are referred to as "dual variables" in the field of optimization, we call the resulting algorithm dual mirror descent.

The algorithm works sequentially by assuming uniform resource consumption over time is optimal and updating the dual variables after each action. It starts at a moment in time (t) by taking an action (xt) that maximizes the reward minus the opportunity cost of consuming resources (shown in the top gray box below). The action (e.g., how much to bid or which ad to show) is implemented if there are enough resources available. Then, the algorithm computes the error in the resource consumption (gt), which is the difference between uniform consumption over time and the actual resource consumption (below in the third gray box). A new dual variable for the next time period is computed using mirror descent based on the error, which then informs the next action. Mirror descent seeks to make the error as close as possible to zero, improving the accuracy of its estimate of the dual variable, so that resources are consumed uniformly over time. While the assumption of uniform resource consumption may be surprising, it helps avoid missing good opportunities and often aligns with commercial goals so is effective. Mirror descent also allows a variety of update rules; more details are in the paper.

By design, dual mirror descent has a self-correcting feature that prevents depleting resources too early or waiting too long to consume resources and missing good opportunities. When a request consumes more or less resources than the target, the corresponding dual variable is increased or decreased. When resources are then priced higher or lower, future actions are chosen to consume resources more conservatively or aggressively.

This algorithm is easy to implement, fast, and enjoys remarkable performance under different environments. These are some salient features of our algorithm:

Acknowledgements
We would like to thank our co-authors Haihao Lu and Balu Sivan, and Kshipra Bhawalkar for their exceptional support and contributions. We would also like to thank our collaborators in the ad quality team and market algorithm research.

1Formalized in the equation below: ↩