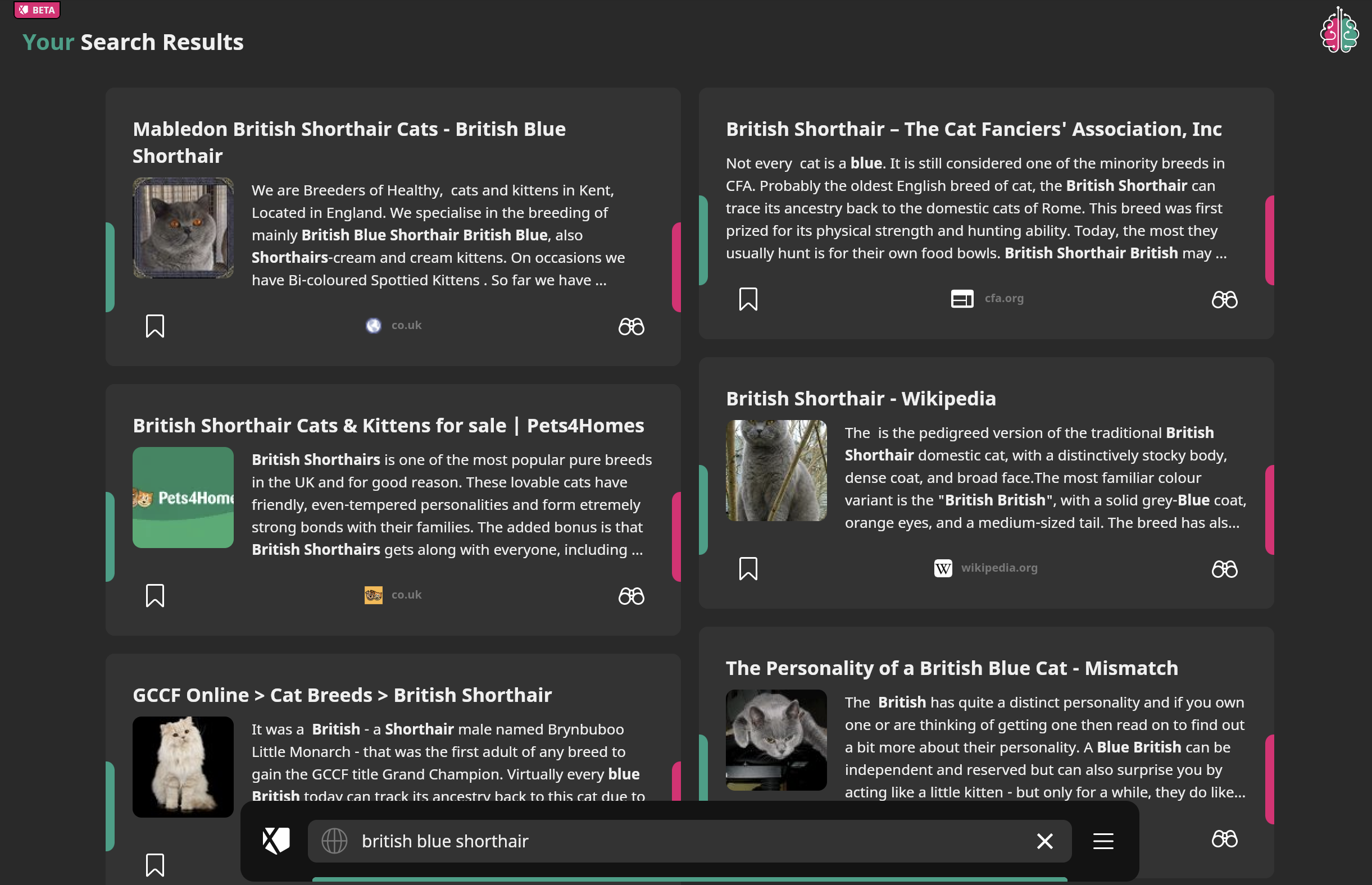 Berlin-based Xayn, which as we reported last year is doing ad-free, personalized, privacy-safe search as an alternative to tracking and profiling adtech giants like Google, has expanded its product offering — launching a desktop version (in beta for now).

The desktop Xayn WebBeta is described as a “light web version” of the product with similar functionality to the mobile app — though of course there are differences, such as not being able to literally swipe on content to signal interest/disinterest, as you do on Xayn’s mobile apps.

Xayn isn’t a browser itself, per se, though it’s crossing the streams a bit (and can self-describe as a “browsing engine”) — since, as well as private search, it also offers an in-app browsing experience by populating a feed with snippets of content organized in the form of a discovery/news feed.

You’ll likely notice a short lag on loading the software in a desktop browser (also true on mobile) as Xayn’s AI figures out what to populate this feed with. It seems marginally longer the first time you fire the software up — when it’s starting from scratch (localizing the content to your country) vs repeat visits when the AI will have your individual browsing signals to work with.

On the desktop Xayn, you can signal a like or dislike on a particular piece of content by hovering the mouse next to the green (to like) or pink (to dislike) bar, which appear on the left and right sides of the content box respectively, and then clicking on the up (or down) thumb icon that pops up. So it’s actually a left click to like.

And if you really don’t need another feed in your online life you can switch off the discovery view — and have only a search bar on loading.

Search results are displayed by default in a similar grid of rectangular content panes to the discovery feed. Which is a little lacking in information density for this information worker… 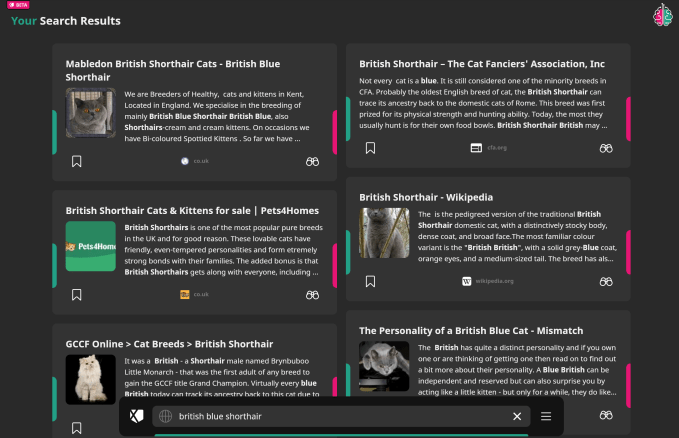 Xayn’s learning AI can be toggled off whenever you like, by clicking on the brain icon in the top right. Say if you want to browse ‘unwatched’ — i.e. without the stuff you’re looking at being used as learning material for the AI to decide what else you’ll get shown (both for content in the feed and search results).

You can also reset the learning manually by clearing your browsing data — if you want to purge the whole thing and start again.

Another carrot to entice users is no ads: Xayn is ad-free — which of course isn’t the case with other non-tracking private search engines (like DuckDuckGo or Qwant), which tend to rely on showing contextual ads.

And in another break from the search industry ‘norm’, its AI’s search algorithms are open source.

Other features available on the desktop version of Xayn include a ‘deep search’ offering that it says lets users dive into a topic via “a simple click to be shown a personal reference library of relevant content”; and ‘collections’ — a bookmark-like offering which lets users “collect and store their favorite web content by creating, filling, and managing collections”.

Plus, as well as being ad-free itself, Xayn has baked in an ad blocker — blocking ads on third party sites for a “noise-free” browsing experience as it puts it.

Its first focus for the desktop is Chromium-based browsers and Firefox — so Safari users will need to switch to a supported browser to kick the tyres of its WebBeta.

The mobile version of Xayn’s product launched back in December and has been downloaded more than 250,000 times worldwide since then, according to the startup.

Three months after launch it says users were already conducting 100,000+ active daily searches — feeding in the browsing data and interest-based swipes that the AI uses to train and improve the personalized content discovery which is core to Xayn’s value proposition. And because it’s doing all this learning and reranking on device it’s able to tout its user-specific search results as ‘privacy safe’.

It also tries to avoid a filter bubble type effect by consciously injecting variance — so its algorithms don’t always just feed users more of the same.

Both the desktop and mobile version of Xayn use a technique called Masked Federated Learning to tailor the user’s web experience without compromising their privacy.

Google is also of course working on evolving its own ad targeting technology — currently it’s piloting a technology called FloCs (aka ‘federated learning of cohorts’) to put browser users in interest buckets for ad targeting purposes, as it works on deprecating tracking cookies. But its core business remains people profiling and selling your attention to advertisers — something Xayn definitely isn’t doing.

“We started Xayn as a direct response to the false privacy vs convenience dilemma and quickly proved that it’s possible to solve this trade-off so users are no longer losers. In fact, with each update, our fantastic team of engineers and designers demonstrates all over again how privacy, quality, and great UX go hand in hand,” said Leif-Nissen Lundbæk, co-Founder and CEO, in a statement.

“We didn’t want to copy what’s already out there but instead re-think it and create something new. With Xayn, you can find your favorite part of the Internet — either by actively searching the web or by browsing through the discovery feed that offers personalized content suggestions from the entire Internet. Either way, your privacy is always protected.”

“In creating Xayn’s web version, we have taken all the elements that made the app great and adapted them to the desktop browser window,” added Julia Hintz, its head of design, in another statement.

“The privacy-protecting algorithms, the intuitive design, and the smooth animations have found their way into the web version. Users can switch effortless between mobile and desktop without leaving their familiar environment. This is key for the seamless, deep interaction experience that makes Xayn special.”

In the web version of the product, Xayn says users’ personal data stays privately within the browser.

Asked about the security of the desktop product, a spokesperson told us: “Desktop computers are less safe than smartphones in general. However, Xayn protects personal data by using decentralized privacy-preserving machine learning in combination with encryption. From the pure technical point of view, Xayn is actually a browser within a browser on a desktop device. On desktop devices, Xayn runs in a sandbox in the respective browsers and this is how it protects personal data from unwanted third-party access.”

Future features Xayn plans to add includes the ability for mobile and desktop users to synchronize their personalized experience across multiple devices, while keeping their privacy intact, so the AI’s learnings can go with them wherever they’re online.

To check out the WebBeta version of Xayn’s search engine on your desktop computer point your browser at www.xayn.com.

Earlier this summer, Xayn announced a $12 million Series A funding round led by the Japanese investors Global Brain and Japanese telco KDDI, along with participation from prior backers including Berlin’s Earlybird VC — bringing its total financing to $23M+. Unsurprisingly, then, Asia (starting with Japan) is now a big focus for the Berlin startup.